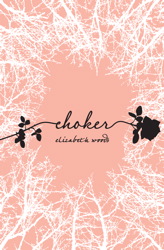 Published by Simon & Schuster
Released January 4, 2011
233 pages
Where I got it: Public library
Rating: 3 stars

Ever since Cara’s family moved when she was in middle school, she’s been a loner.  That’s because when they moved, they left behind her one friend in the entire world, Zoe.  Zoe’s a trouble-maker who has a troubled life, but without her Cara just doesn’t feel like she can do anything.  Now she’s being teased mercilessly in high school, and her older, lawyer parents don’t spend nearly enough time with her.  Just when everything looks like it will never get any better, Zoe appears in Cara’s room.  She’s run away, because she’s done something really bad, but Cara doesn’t care.  Suddenly, Cara begins to have enough confidence to flirt with her crush, and to change up her personal style.  There’s more to Zoe, though.  Bad things start to happen, and Cara grows more and more frightened of her friend as she realizes she may be the cause.

Choker is a good, high school thriller of a story.  The book opens with a flashback of Zoe and Cara as children, and immediately we are introduced to Zoe’s dangerous nature.  Cara is harshly ridiculed at school for stuff that comes across as not being her fault–we’ve all been there, right?  Instantly, shy and awkward, Cara becomes a character that we can empathize with (although I can see how her mousy demeanor might annoy some readers). Cara’s parents come across as very absent and totally clueless to what is happening in their daughter’s life.  Woods also succeeds in painting Zoe as both a charismatic and utterly repulsive character.

There is a twist to the story, but I won’t give it away here.  I feel like the writing was fairly well-done as far as the plot goes, but I was still able to pick up on the clues and guess what was going on by about page 70.  That’s not to say the book wasn’t enjoyable anyway–it was.  I had a lot of fun watching how things unraveled, and seeing how I was so right all along.

Choker is an intense, fast-paced book that deals with teenage bullying, the pain of being an outcast, and the stress of modern high school life.  It was the first 2011 I read this year, and it was not a disappointment.  I expect more thrilling stories from Elizabeth Woods in the future.

This entry was posted in YA Book Reviews and tagged review, YA fiction. Bookmark the permalink.